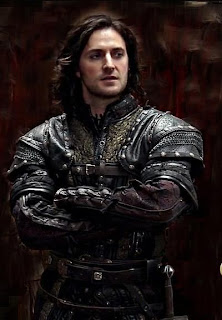 This is a piece I posted last year :
reposting in prep for  FANSTRAVGANZA !!!
I had never heard of this dangerously handsome man, Richard Armitage, before last summer with the help of the Starz miniseries Pillars of the Earth. I saw the ads for the show online but my husband and I decided a month earlier to cancel cable and get one of those boxes to help lower bills, so We had no access to the show and I REALLY wanted to see it. We decide, after a netflix ad popped up in front of my e-mail one night, that we would check it out. Ten bucks a month was way better than fifty so we signed up and I started exploring . I came across a Robin Hood that I had never seen before so I watched it.

I saw Richard, all decked out in black leather(adore a man in leather) with his blues eyes sparkling at me, (or were my own eyes filled with stars? couldn't tell the differance.) I was hooked instantly. As I watched more and more episodes the personality, and emotional struggles of Guy were getting closer and closer to those of a charactor I created in 1999 for my first novel and to help me focus while I wrote I sketched a picture of him. The more I watched the more I knew that this man was the perfect match for my story. Then season three came on, withhis whole new look, I about fell off the couch. The image on my computer screen was the very image I had created in my head. I ran to the office closet, dug out the sketch and ran back down to my computer. As bad of a sketch artist as I am anyone could see that the paper I held in my hand could have been drawn from the image on the screen. Same face, same hair, simular armor, I was floored. Did I maybe see him somewhere before? Not likely, 1999 was along time ago.
I got all my BBC fixes from PBS until Netflix - I had seen and loved the Vicar immensely but we didn't get many episodes and certainly not the ones with Harry,I discovered that a few days later. - We had Spooks/MI-5 once a week but they were still showing Tom and Adam and not, I found later, in chronological order. I discovered, (thanks imdb.com) I had watched many of the shows he had been involved in but our PBS broadcasts were sporatic. I managed to miss all of his. But still, My image was created in my imagination 11 years earlier. Fate? Psyhic connection? Coinidence? who knows why I saw Sir Guy in my head a decade before another writer and Richard brought him to life, but I'm glad it happened
Posted by Unknown at 10:23 AM 1 comment:

Are you ready for some serious eye candy?

Looking for some interesting takes on history?

Just want to have fun? 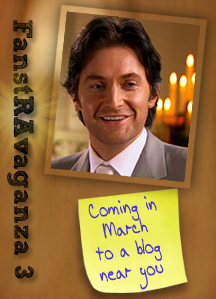 A full week of the

visit any of these blogs for details:
A is for Armitage

An Obsessed Fanatic
Avalon’s Realm
C.S. Winchester
Cerridwen Speaks
Crispin’s Eclipse
Do I Have a Blog?
Everything You Ever Wanted to Know About Country Life
Feminéma
Fly High!
Funky Blue Delphinium
I Want to be a Pinup!
Just Another Armitage Fan
La Loba
Me, My Thoughts & Richard Armitage
Melanie’s Musings
Mr John Thornton
Musings & Other Enigmas
Phylly’s Faves
Searching for MY Mr. Darcy
Something About Love (A)
thearmitageeffect
y que iba yo a contar
White Rose: Sincere and Simple Thoughts
Jonia’s Cut
DistRActed Musings of One ReAlity
An RA Viewer’s Perspective from 33° 0′ South of the Equator;
bccmee’s Richard Armitage Fan Vids & Graphics;
CDoart: Richard Armitage & History & Spooks;
Confessions of a Watcher;
DistRActed Musings of One ReAlity;
me + richard armitage;
RAFrenzy;
Richard Armitage Fan Blog;
The Squeee.