Happy Holidays to All

TO ALL MY VISITORS AND FOLLOWERS
HAPPY HOLIDAYS
Posted by Unknown at 9:22 AM No comments:

THE NEXT BIG THING

A big thank you Sharon -http://newenglandmuse.wordpress.com - for tagging me  in
The Next Big Thing Blog Hop.
For those of you who don’t know, the goal is for me to answer a list of questions about my book, and then at the bottom of the post, tag five more authors, who will answer the same questions next week. It's sort of like writers tag.


1. What is the title of your book?
The title of my current project is "Immortal Summer"

2.Where did the Idea for the book come from?

I actually got the basic Idea from a student a few years back. They had to write the first act of a screenplay and this student started on a vampire idea similar to my story but bout three weeks into it they abandoned the iea for something else.

3. What genre does your book fall under?
That's tricky one, It is has a base of historical people and events but it also is a romance that involves a paranormal-type curse and witchcraft. I think the jury is going to be out for a while one this one.

4.Will your book be self-published or represented under an agency?
My first two books were self-published and this one may just be as well but I haven't decide for sure yet.

5.How long did it take you to write the first draft of your manuscript?
I actually started this one about 5 years ago but put it aside due to an overwhelming deluge of other ideas- had to put them on a to do list- and projects I was already working on. I restarted working on it about 6 months ago in between all my other activities, I plan to get rolling full force on it after the holidays and have it finished(I hope) by late spring.

6. Give a one sentence synopsis of your novel:
Troubled and confused, 18 yr old Persephone Vascos finds refuge and eventually love in the company of her mentor, the young Prof. St. Germain, only to discover a whole new and unexpected meaning to love everlasting.


7 . What other works would you compare your story to?  Well just about any romantic paranormal/fantasy story- a most recent example could be  maybe be the Twilight series. yeah kind of along those lines but still very different. Maybe I'd compare it more to the old Dark Shadows TV series. or better yet, a combo of the two.
8. Who or what inspired you to write this book?
I found an outline, stashed away in the file cabinet, that a student I was tutoring had discarded  a couple years earlier. I looked it over decided to hang on to it. The student had scrapped the story idea and went off in a whole other direction.  A few nights later I dreamed an entire scene from the story  and the next night a little more came to me. I started to write it all down but life and family stuff got a little rough and I had to put it aside for a while. 2 years later I came across my notes and decided to start working on it again. It's been 3 years since I started researching the Historical and Mythological aspects of the story and as of now I have approximately 7 chapters written. It may be a while yet before this book is finished.
9. What else might pique the reader’s interest?


Meeting him had been the most exciting experience she’s had since she arrived in Austria seven weeks ago. He was so mysterious, almost never leaving his house, a house that was filled with such beautiful antiques and paintings from hundreds of years ago. He had nothing inside the house from this century, no electricity, no indoor plumbing, no central heating, nothing. Yet, he owned a cell phone and flew a helicopter.


The darkness in his eyes was more than just coloring, they seemed lost, lonely, empty, but when he looked at her they were not cold. Not cold as they were when he would stare at the fire or out over the balcony. Then they would be cold and emotionless. His eyes together with the coal black curls and the darkness of night made him look deathly pale. She wondered if he had a phobia of some kind or if he was perhaps fighting a disease, cancer maybe. She could sense that he had a secret, a profoundly deep secret, and that only made her want him more.


Halfway up the dirt path Penny heard footsteps behind her. She started to quicken her pace, almost to a sprint, but the footsteps continued to match hers. Through the breaks in the trees she could see the candle light glowing in one of Thierry’s second floor windows. She started running, remembering that her Grandfather had told her the wolves would prowl for food near the paths on the nights when the moon was dark. The recently transplanted city girl knew how to defend herself against the kind of wolves that prowled the streets of New York City but her self defense class would be useless on the four-legged kind of the Alpine woods.


She glimpsed behind her as she hurried around the bend in the path. She no sooner turned her gaze back to trail when a large shadowy figure sprung out from the trees and grabbed her by the arm. She screamed in terror.


“Persephone?” A deep voice came from the dark.


Penny gathered herself enough to focus her eyes on his face. “Thierry?” She sighed in relief and flung her arms around his neck. “Am I ever glad to see you. I think I was being followed.”


“You were being hunted.” He slid one arm around her waist and pulled her closer. His cold, pale hand brushed her cheek as she rested her head on his chest. “What are you doing out here in the night? Hasn’t anyone told you not to come in the forest when there is no moon? It’s dangerous,” He released her from his embrace and held her by the shoulders, “and foolish. You could have been killed.”


“I wasn’t thinking of that, I just wanted to see you.”


“You’re lucky I was out here, I don’t think you would have made it to my door otherwise.” He took his long cloak off and wrapped it around her shoulders. “Here, you’re shivering. Let’s get you inside by the fire.”

How about making yourself  a magical Merlin drink while you indulge in these last few episodes. 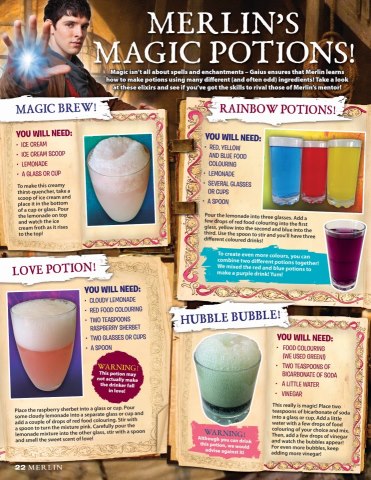 Posted by Unknown at 9:36 AM No comments:


These 2 should really work together more often
LOVE IT !!!

I have a botttle of wine Richard, wanna share?

Posted by Unknown at 9:10 AM No comments: