Ah, Oscar night, the stars, the red carpet and everyone in the country tuned in to the same channel. I sat perched on the sofa in my livingroom waiting, with much anticpation, as to who would shock us with a dress from mars and who would be simply stunning but this year for the most part they, the stars, were all stunning. The most shocking of all, to me,  was Jennifer Hudson. Her new figure was made for that dress, way to go girl the commercials do not do you justice. Ms. Hathaway's first dress, by the  famous Valintino, was absolutely classic Oscar, a very good chioce.  Hailee Stienfeld was the picture of pretty in her classic 50's prom look.  such a charming young lady. Reese Witherspoon, as gorgeous as ever, presented the image of a classic 1960 Barbie doll, don't get me wrong, she was sensational, I loved it. Helen Bonham-Carter was stunning to say the least, adored her hair, and I think her nervousness came through every time "The King's Speech" was mentioned. Her anticipation, not only for her own nomination but her fellow cast and crew members, was quite clear upon her face.  This year there were no outrageous fashion flops and all the ladies were beautiful and quite traditional in the gown choices.
The men too were all looking extremely handsome. Mark Wahlberg  was looking rather smart and there was yet still a hint of his movie character shining through his face. Jeff Bridges was, well, his usual charming and robust self. Though I have to say peronally Christian Bale's beard did nothing for me. Mr. Bridges has had one for so long one hardly notices it any more, it suits him but on Christian it seemed a little alien. Over all I'm not too keen on beards, the scruffy look sends me but I just don't like full beards. Colin Firth was my choice not only to win awards but to dazzle us all  with his sophistcated yet humble demeaner which he did most graciously. I was thrilled, and my neighbors all knew it from the yelling and hooting coming from my house, that both Colin and his picture walked off with the prestige they deserved. Thank you Colin such a splendid performance.
There were no dominating clean sweeps by one movie this year. It seemed to be spread out equally among everyone and that is a good thing because every movie deserves proper recognition.  I have had the chance, serveral years ago, to walk one of those red carpets (at a much smaller but important event) in Beverly Hills and it is intimidating, to say the least, with people pointing and staring you. I applaud all those who have the calling to put themselves in a position to be scrutinized and judged. The movie business is risky and those who succeed deserve all the praise and that is what the Oscars are all about. Every one, right down the line from the executive producer to the people who sweep the cutting room floors,  who worked hard to bring such an enormous project, like a major motion picture, to life should recieve thier share of the glory.
Posted by Unknown at 12:20 PM No comments:

The Contessa Ippolita  has some great Italian recipes,
check them out at her new blog

Richard on the brain 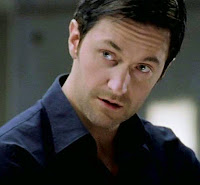 Get your brain working . print out this word find and search for these things that involve King Arthur.

Need something done? Want to advertise your talents ?  Or maybe you're just looking for a cool and zany gift idea.
Head on over to fiverr.com, the place where people will do anything for $5. There's some wild and crazy stuff in there. just reading thru the posts with have you laughing.
http://www.fiverr.com/
Posted by Unknown at 2:33 PM No comments:

Like a fine Wine just gets better with time:
Adrian Paul, actor, director and producer. Known most for his role as The Highlander-Duncan Macleod. He has begun his own production company called Filmblips and they have some pretty intersting projects coming out of the gate. check them out at www.filmblips.com
Posted by Unknown at 10:32 AM No comments: