Byron is my most favorite poet and those who know me can tell you the we have quite a bit in common.
Here's a short intro to the man I think was the most misunderstood person in history- (outside of Richard III) 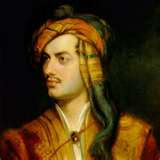 1788-1824
Bryon was born in London on January 22, 1788 and through his actual name was George Gordon Byron; throughout his life no one ever called him anything but “Byron”. Born with a club foot he spent his entire early childhood enduring excruciatingly painful treatments and after having researched some of those treatments I can surely feel for him, ouch. At the age of two his mother took him to live in Aberdeen, Scotland, where she re-engaged her association with her husband and her son’s father, Captain John Byron. The Captain was a cruel man who eventually squandered away most of their wealth, the attempt at reconciliation did not last long and the Captain was gone again.


In Aberdeen, Bryon, somewhat sporadically, attended grammar school. The unsteady attendance was mostly due to the fact that he and the schoolmaster did not, shall we say, see eye to eye. Yes, Byron had an attitude, as a child he was prone to tantrums, an aspect of his personality which would carry over into his adult life. Like his mother, he had frequent and sometimes violent moods swings, which leads me to suspect that they both suffered from Bi-polar, (a hereditary disorder) in addition to the teasing Byron endured, and his ultimate sensitivity, about his foot which caused psychological pain in itself, I’m sure.

He is known for his outrageous behavior, mostly towards women. He had a wife from whom he was quickly separated and many mistresses. One mistress was Claire Clairmount, the stepsister to Mary Shelly the author of Frankenstein and the wife of poet Percy Shelly who was Byron’s dearest and closest friend. Claire gave him a daughter, Allega, whom he loved dearly and when she died of an illness at the age of five Byron was greatly distressed. He loved that child, I think, more than anyone in the world. He had another daughter with his wife, Annabelle. Augusta was named after his half-sister, whom he also loved dearly and quite inappropriately as they had had a brief incestuous affair. She inherited her father’s intelligence, with a knack for engineering, and she together with Charles Babbage wrote what could be considered the first computer program. She too, unfortunately, was to die at an early age like her father and half-sister.

Lord Byron was eccentric, at times wild and unpredictable, yet he had insurmountable passion and loyalty towards the causes and the people that meant the most to him. Those who truly understood him, and there were not many, were given his whole heart. Like his mother he was highly prone to emotional outbursts, like his father he squandered his fortune, hey, no one is perfect. He was handsome and knew how to impress and seduce the ladies but was never to stay long with any specific one. He was, in spite of his maladies, a courageous soldier and greatly committed to political struggles for freedom, mostly in Greece. He was an avid reader and fascinated with the subject of history. He was an excellent swimmer, adored Greece, Italy and Scotland, which anyone could tell just by reading his poetry. His work was both praised and criticized by many(mostly criticized) and certainly under-appreciated during his lifetime.


To me Lord Byron was a poetic genius, albeit strange, yes, but genius all the same. On an emotional level I can relate to him and understand the turmoil he went through during his life, my own has been no picnic either, especially my childhood (but that’s another long story). He’s a lot like me, though I am not that excessive, which is probably why I adore him and his eccentricities and can heartily understand the passion within his work. (Byron and I have yet one more common trait as I am 1/3 Scottish and my ancestors came from the same general area.)

My favorite poems by Lord Byron include:

and the number one spot goes to: ,

I Would I Were A Careless Child.

Here are the first 2 verses: ya want the rest you'll have to read it yourself. (big cheesy grin)

I would I were a careless child,
Still dwelling in my Highland cave
Or roaming through the dusky wild
Or bounding o’er the dark blue wave,
The cumbrous pomp of Saxon pride,
Accords not with the freeborn soul,
That loves the mountain’s craggy side,
And seeks the rocks were billows roll.


Fortune! Take back these cultur’d lands
Take back this name of splendid sound,
I hate the touch of servile hands,
I hate the slaves that cringe around;
Place me among the rocks I love,
Which sound to ocean’s wildest roar;
I ask but this- again to rove
Through scenes my youth hath known before.